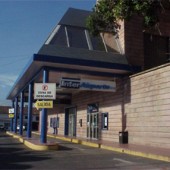 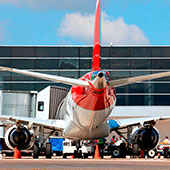 Indians living across the Rio Grande, in what came to be called Comayagüela, they identified the site with the original Aztec word for "Tocontin" (without the first n), corresponding to a sacred dance and ritual of Aboriginal people in the Yucatan area.

Another possible source is a Chinese restaurant called Ton Con Teen, many years was located near the airport.

The broad plain was more than appropriate that in 1920 landed the first plane arrived in Honduras and from that moment Toncontin becomes the field where he later became more aircraft piloted by experts of the time.

In Toncontin begins to write the history of military and commercial aviation in our country and in 1923 two Lincoln Standard planes are purchased to be allocated to airmail, which were used to transport passengers and cargo, and it was in that year came the first aircraft artillery to government service.

In the early days of 1928, being president of Honduras Dr. Juan Manuel Galvez, lands at Toncontin famed American aviator Charles Lindbergh in his plane "Spirit of St. Louis", in which he crossed the Atlantic on a flight of 33 hours from New York to Paris in 1927.

Tegucigalpa airfield gradually grew into the center of the Honduran aviation in 1931 is based TACA building hangars and installing operating offices in Toncontin.

In 1934 in the government of General Tiburcio Carias Andino, he landed a flight company PAN AMERICAN DC-3 aircraft with passengers transferred from the United States, for which it expanded and inaugurated the new runway (even ground).

The movement of domestic and international passengers grew at SAHSA founded the company in 1945, operating DC-3 and the arrival of the four-engine of Pan American World Airways, which thereby cause the government to build a new terminal.

In the administration of Gálvez, the track is asphalted and thus began arriving more sophisticated aircraft such as the DC-7 of the TAN, the Viscount of the company TACA, the Convair and Electra SAHSA, and apparatus of the Honduran Air Force as the P-38 and P-63 Corsairs.

In 1962 he became the first Toncontin Jet passenger plane TACA a BxC One Eleven of English manufacture with the operation of jet planes that continued with the Boeing 737 and 727 models SAHSA and TAN Airlines began respectively.

More than eighty years have passed since the first BRISTOL reached the capital dela Republic, plain "South city continues to be the airport of the capital where American Airlines, Taca, Delta, Continental, Copa and national companies as Isleña, CM Airlines, Sosa Airlines and Central American Airways among others mobilized thousands of passengers and tonnes of freight daily.

The capital of the Republic with more than one million inhabitants. It is located in the department of Francisco Morazan, in the center of the country, 1000 meters above sea level. Tegucigalpa is the capital, is located at the foot of Picacho hill of 1240m above the sea.

Its initial name with the arrival of the Spaniards was Real Villa de San Miguel de Tegucigalpa, name it acquired with its founding by Spanish sailors in the sixteenth century. Since then it is a city that has grown until today, importantly, becoming the largest city in Honduras and its capital.

It is an interesting city to visit, and in it we can visit the historical center, the National Museum, parks, theater, buildings, Also we can make nature trails at El Picacho Hill, and the National Park La Tigra. Also it has a great hotel infrastructure and the Toncontin International Airport. 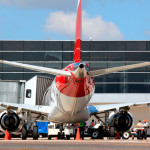