Since 2014, Aeropuertos de Honduras established a Quality Management system, Certified by the Colombian Certification Body ICONTEC in ISO 9001. In 2017 and aligned with its strategic objectives, the preparation to implement an environmental management system under the ISO 14001 standard begins: 2015 at the Ramón Villeda Morales airports in San Pedro Sula and Juan Manuel Gálvez de Roatán while establishing an Occupational Health and Safety Management system for the four international airports.

In November 2018, and after having incorporated environmental criteria in our processes, having developed an awareness program of our collaborators and operational actors, having made modifications or adjustments in infrastructure and the creation of strategic alliances with government entities and service providers Associated with sustainable environmental management, we successfully received our external certification audit under ISO 14001: 2015, receiving the respective certificates on February 4, 2019. 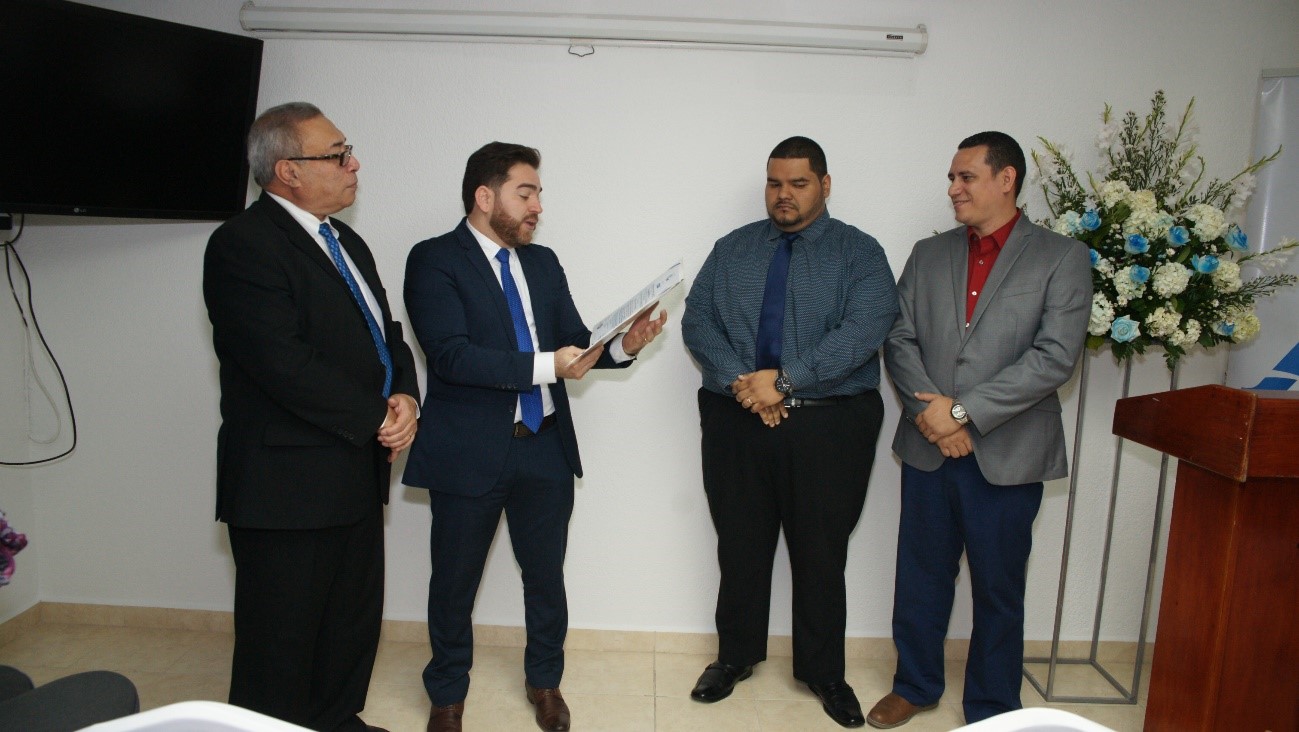 Likewise, as part of our corporate responsibility, we increase this year the participation of our employees in volunteer activities and in compliance with the requirements of ISO 9001 and ISO 1400, we carry out the social consultation with our Interested Parties following the guidelines of the ISO 26000 standard to consider and incorporate as applicable, its requirements and expectations in our strategic plan and operational plans and marking the line in the preparation of our III Sustainability Report

Aeropuertos de Honduras with its Integrated Management System, seeks to identify all possible alternatives to act with social responsibility, promote industrial safety and occupational health, protect the environment and increase the quality of its service.

AS A SOCIALLY RESPONSIBLE COMPANY

Aeropuertos de Honduras supports the tutorial scholarships program with the delivery of 338 scholarships annually in 29 educational centers in Tegucigalpa, San Pedro Sula, Ceiba and Roatan. We also develop other projects such as "making smiles fly”, educational tours and volunteering.

Aeropuertos de Honduras complies with international safety regulations and standards and promotes its culture. has implemented the Safety Management System (SMS) as an effective way to prevent and manage risks in the operational area of the 4 international airports of Honduras.

The objective of the SMS is to identify, analyze, manage, mitigate / eliminate the dangers and risks to provide greater operational safety, complying with international standards issued by the International Civil Aviation Organization (ICAO) in conjunction with the efforts of the operational actors and employees.

Each year around 15,000 people are trained in issues of culture, procedures, identification and notification of hazards in the operational area, all with the objective of maintaining the risks of injury to persons or damage to aircrafts in an acceptable level.

In each airport, safety surveillance tasks are carried out, with specially trained collaborators, who use computer tools specially developed by Aeropuertos de Honduras and which are verified by experienced international experts to manage all operational safety processes.

Also as part of this process in each airport, safety meetings and committees are held, space where all the experts of each airport meet, they meet to discuss safety issues, which result in daily activities and is oriented to the best form for incidents or accidents.

In this way, Airports of Honduras complies with the recommendations issued by the International Civil Aviation Organization (ICAO) and with the National Legislation through the Civil Aeronautic Regulation (RAC 139) regarding the monitoring, evaluation and management of safety, forming part of a mechanism of joint and coordinated action of all the parties involved in the aviation industry.

Aeropuertos de Honduras, is a certified company since 2014 under the ISO 9001: 2008. As a voluntary and strategic initiative aimed at increasing the performance of its processes and resources to improve customer and interested parties satisfaction, in March 2017 the company decided to submit through ICONTEC to a transition audit to ISO 9001: 2015, successfully achieving its purpose.

The quality management system has led INTERAIRPORTS to:

• Remain in constant search of the requirements and expectations, not only of the client but also of all the interested parties to improve the performance of the company, using the interested parties focus groups, and of international methodologies and standards such as periodic measurements of the Four terminals, of the quality of the airport service through ASQ (American Society for Quality). • Include in its strategic plan risk consideration, changes prevention, determine the resources and required knowledge and the role of suppliers in the processes. • To develop in its helpers a service culture which is evidenced in the continuous improvement of the processes and in the increased satisfaction of our clients. 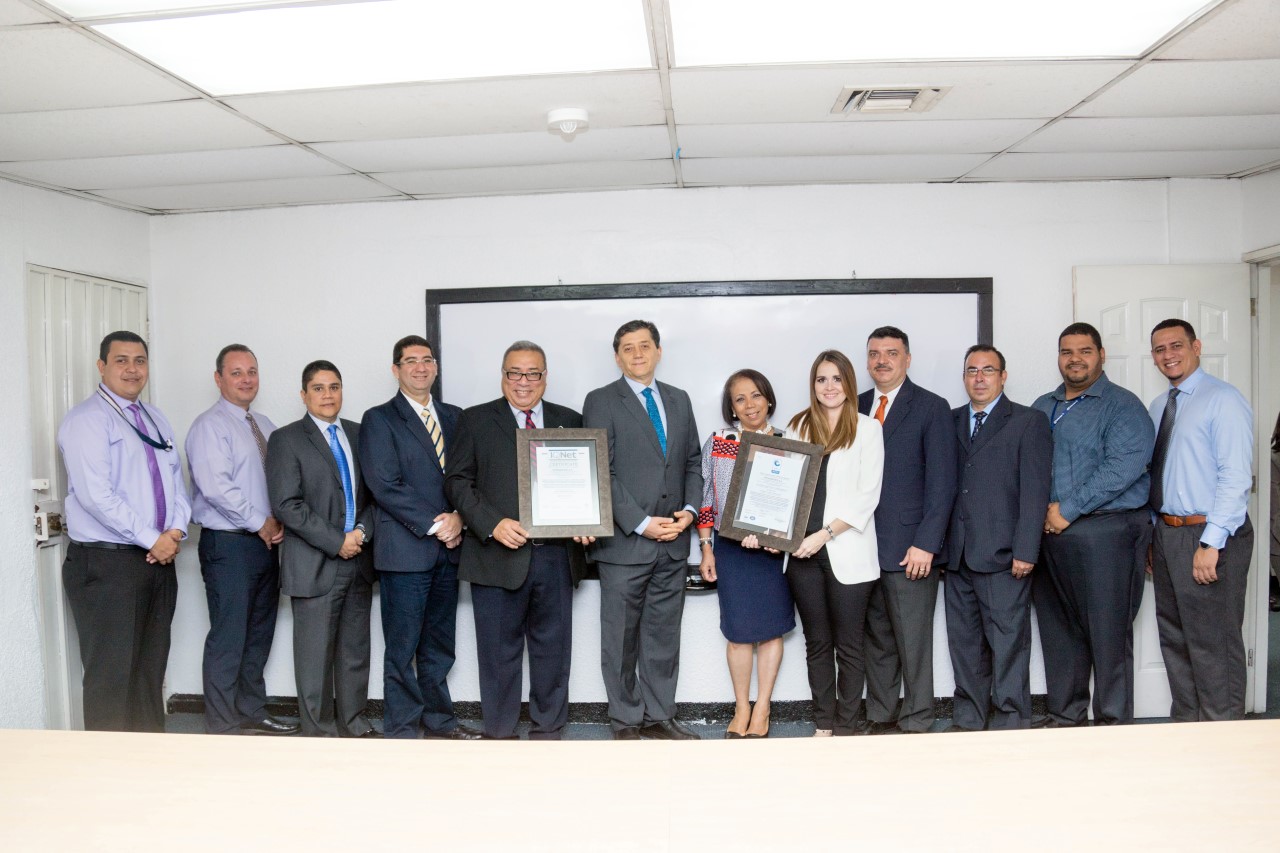 One of the greater acknowledgements towards the modernization of Honduras Airports is the number of airlines operating in the country, achieving in these eighteen years of operations of the concession to triple the number of national and international airlines.

The Honduran Airports continue to gradually transform in centers of business and commerce, offering a diversity of spaces, goods and services for passengers and visitors.

Quantitative indicators of airport performance, show that airport activity has experienced sustainable growth by mobilizing 2.3 million passengers in the year 2018. This growth is contributed to a large number of international passengers.

The increments, added to the opening of operations of new airlines, and new routes by the airlines that already operated in the country, presuppose a strengthening of the modeled growth rates.

Aeropuertos de Honduras in these 18 years of administration has demonstrated its loyal compliance of the concession contract granted by the state.

The efficiency of the administration of the 4 international airports has permitted towards the contribution to the state up to June 2019, in more than 3.5 million Lempiras.

The investments in the airports have been made in various areas such as security, terminals, equipment construction of the new airfield infrastructure.

In the years of the concession, more than 63 million dollars have been invested, which means obvious transformation that represent more and better operations.

INVESTMENTS MADE BY THE CONCESSIONAIRE IN THE AIRPORTS ($ DOLLARS)

EXPANSION AND MAINTENANCE OF SKIING

Aeropuertos de Honduras has invested more than 114 million Lempiras in the project to improve the airfield Toncontin.

The project involved the extension of 300 meters of the runway that allows useful service of 150 meters of track, 60 meters runway safety strip, 90 meters safety area leveled runway end construction margins on each side of the active track and the construction of a perimeter fence of 1,900 meters to comply with the aeronautical security area.

The expansion project of the runway of Toncontin, meets the finality of improving the operational safety of the runway and the airport itself, and at the same time also enforce strict performance of the Concession Agreement

In 60 years of existence of the Toncontin International Airport for the first time an extension of 300 meters is carried out, that includes 150 meters of useful track, which exceeds 1,862 meters to 2,012 meters in length, with a leveled area, making one of the few airports in Central America that has safety areas at the end of the runway.

By having 150 meters more of track, operations performed by the airlines are safer for aircraft type A320, A319 and B737.

Likewise, the Airport in Roatan, Juan Manuel Galvez has expanded 8,300 m2 of the aircraft parking platform. It has a fully improved track, thus achieving an extend in its life. This was achieved in collaboration with the State. 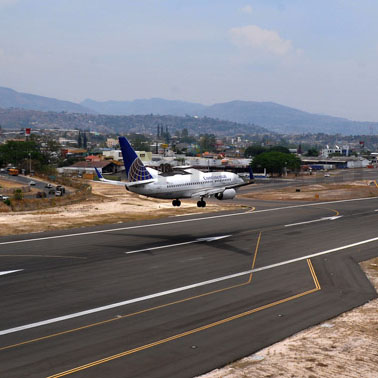